Homes, Living and All Things Local

Unemployment Up – Sensational Statistics – What’s going on with Jobs?

Today it was announced that our economy lost 598,000 jobs in January.  The fourth highest number of jobs lost in a single month (the highest was September 1945 with 1,960,000 jobs lost).  Every one of the people who lost a job last month is likely to have a difficult time in the months ahead making ends meet and finding a new job.  Our best wishes & prayers go out to them.

But let’s look at these figures a little more closely.  The fourth highest number of jobs lost in a single month.  Let’s compare January 2009 with those other three months: 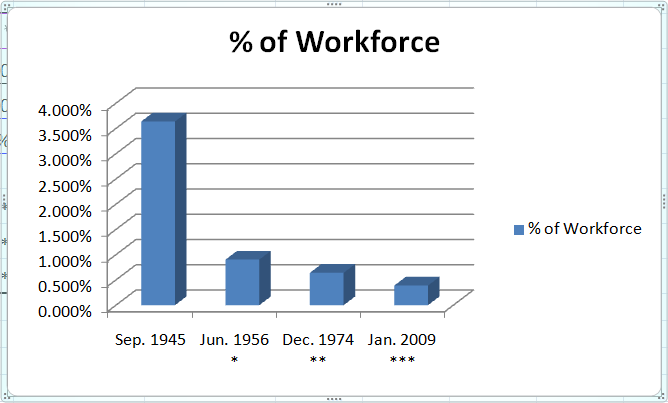 La Crescenta Homes Sales – what does a Buyer’s Market look like?

The downside is obvious – price declines create stress and financial difficulty for many home sellers.  The upside – low prices and low interest rates are creating great opportunities for buyers.

Statistics on La Crescenta Homes for Sale in January 2009

The “Inventory Chart” of La Crescenta homes for sale  shows that sales have declined sharply since May of 2008.  Declining prices cause many home owners to put off their plans and take their home off the market.  As the number of homes for sale drops foreclosures and “short sales” dominate the market.  These homes usually have a great deal of “deferred maintenance” – in other words they are fixers.  The amount of work they require is the reason that the price has been heavily reduced. 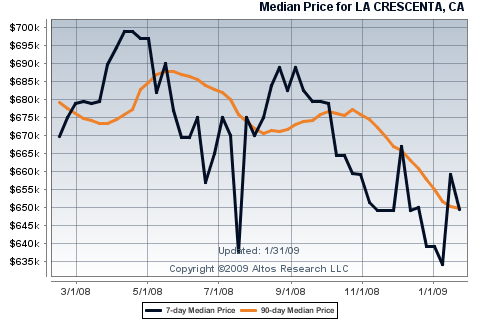 Even though there is a shortage of homes on the market in La Crescenta, the downward pressure of foreclosures and “short sales” has reduced prices from an annual peak  of approx. $687,000 in May 2008 to their current lows of about $650,000in January 2009 – a drop of almost 6% in 6 months.

In future posts we’ll discuss other areas as well.

But, as a quick comparison prices went down about 18% over the same period for Sunland home sales and stayed almost level for La Canada homes sales.

For more details on your neighborhood or to order your own chart info you can reach me via email at John@JohnHickey.com or by phone at 818-541-7311.

La Crescenta Homes for Sale and Time on Market Statistics

The following graphs show the inventory of homes for the 12 months to October 2008. These include Glendale and La Crescenta; La Canada; Sunland and Tujunga California. For your own personal updates with this plus additional details, click on the link for statistics in La Crescenta and Glendale or give me a call.

The Glendale and La Crescenta real estate markets are closely related, have had significant foreclosure activity but continue to have a healthy amount of sales which are neither foreclosures nor “short sales”.  Interestingly, inventory in La Crescenta and the larger market of Glendale have remained relatively constant.  For comparison take a look at La Canada and Sunland/Tujunga homes for sale below:

La Canada homes for sale inventory rose dramatically throughout the year until August and then dropped off sharply.  The La Canada real estate market has so far been largely unaffected by foreclosures or “short sales”.  Inventory rose along with market time largely as a result of buyers’ unwillingness to pay list price for homes that did not reflect the price drops associated with foreclosures.

For your own copy of this report just use the link or give me a call.
Categories : La Crescenta Homes, La Crescenta Stats, Statistics, Sunland Tujunga Homes
Comments (0)
Next Page »